Happy Monday! This mishmash will be a little shorter because I was given a blog award.
I'm allowed to pass this on to any number of people, so today I invite you all to accept this award from me because I appreciate each and every one of you. 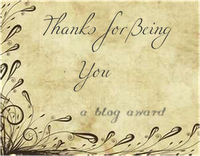 That's it for me. What's on your mind today?
Posted by Kelly Hashway at 12:00 AM