Check out this excerpt from The Withered Rose, a sci-fi novel by Penny BroJacquie, exclusive to the Wrath and Ruin boxed set.

“To the basement,” Althea commanded the group of brown-clad people who were hauling her children down the stairs. Floriana felt like she was suffocating under the pressure of the bodies pressing into her as they led her into a bright, almost daylight-like room. Out of the corner of her eye, she saw Vittor trying to keep his balance as he was dragged in by a couple of strong young men.
“Look who’s here.” An old man’s nasally voice echoed from the back of the large room as a short man in a white laboratory coat emerged from behind a row of iron cupboards. He was followed by a small group of similarly dressed people.
“You must be Floriana. I have heard so much about you.” The old man approached her and brought his face close to hers. Floriana felt irritated when his nose almost touched hers as he observed her features through his glasses.
“Have I got something in my teeth?”she asked scathingly.
The old man took a step back and he turned his back on her as he addressed her mother in a shrill accent. “Sarcastic and scoffing. Just like her grandfather. Althea, I expect you to get rid of this unpleasant girl right now. I do not want her to mess things up now that we have finally put our plan to exterminate lesser human races into action.” He sniffed noisily as he turned back to one of the many laboratory tables and chairs in the room. His team of white clad scientists looked absorbed in their notes, indifferent to the new faces that had just come in.
Floriana straightened her clothes as she was freed from her mother’s grip. Vittor stood beside her, cleaning his glasses with the edge of his plaid shirt.
“This is Dr. Foulkaneli. Show some respect,”Althea said to Floriana furiously. “Why do you have to be so annoying?” Althea hissed, pointing at her daughter.
Her mother’s continuous verbal assaults hurt Floriana’s soul deeply. Offended and enraged, she could not control her anger anymore.
“Why do you have to be alive?” Floriana’s body quivered as tears flooded her eyes.
“You are so arrogant and ungrateful. I brought you here, where magnificent things are happening. You are both in the center of the action, where the brightest minds of the world have gathered to write history, to give humanity the purity it always needed. We are giving humans the final push, making the decisive step toward divine perfection. Only those who are genetically perfect will survive. All disabled people, homosexuals, and those of a lesser race will be exterminated from the face of the earth. We are about to touch God’s hand, and you have the privilege of watching it happen.”
Althea seemed lost in her daydream of a dystopian future where human rights were disregarded and an elite set of identical ice-blond people ruled a society devoid of justice. Floriana felt sick to her stomach as she watched her mother give her senseless and merciless speech with a mad look in her eyes. It proved definitively that she was mentally deranged.
“How did this happen to you?” Floriana uttered without hiding her disgust; tears rolled down her face.


“The tone in your voice reveals your disapproval. I cannot blame you. You have been brainwashed by your grandfather into believing that Black Rose ideology crap,” Althea responded as she turned her back to them and approached an iron cupboard. She pulled a set of keys from a pocket in her black suit and opened the cupboard. “You are unable to distinguish what is wrong and what is right. Dr. Foulkaneli is right; you will never adopt our ideology. Deception has such strong roots in your conscience that you will never choose the right path. Bringing you here was a huge mistake. You have to go,” she said icily as she took something out of the iron cupboard. Then she closed the door of the cupboard and turned the key in the lock. As Althea turned around, Floriana felt her heart stop beating when she noticed her mother holding a gun.

If you enjoyed the excerpt and want to keep reading, preorder Wrath and Ruin for only $.99 and get The Withered Rose along with 23 other sci-fi/fantasy books! 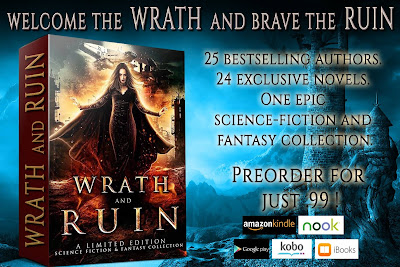